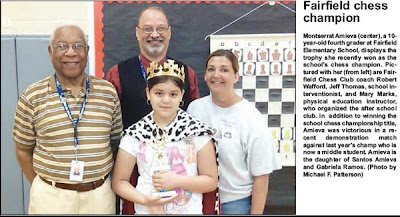 From the May 27-June 2, 2009 edition of Frost Illustrated (Fort Wayne, Indiana). (No exact date is given for the chamionship). Fairfield Chess Championship Montserrat Amieva (center), a 10- year-old fourth grader at Fairfield Elementary School, displays the trophy she recently won as the school’s chess champion. Pictured with her (from left) are Fairfield Chess Club coach Robert Wafford, Jeff Thomas, school interventionist, and Mary Marks, physical education instructor, who organized the after school club. In addition to winning the school chess championship title, Amieva was victorious in a recent demonstration match against last year’s champ who is now a middle student. Amieva is the daughter of Santos Amieva and Gabriela Ramos. (Photo by Michael F. Patterson)
Posted by Jan at 8:43 PM