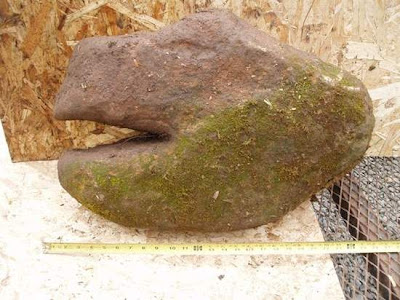 From Cincinnati.com Expert: Turtle rock has tool marks Last Updated: 6:22 pm Friday, May 29, 2009 (Image from earlier article) Maybe there's something to the Morrow turtle rock after all. A local archeologist dismissed Dirk Morgan's find as just an odd sandstone boulder probably shaped by nature. But, Eric Law, a geologist and associate professor at Muskingum College in New Concord, Ohio, said he's pretty confident someone carved the rock that resembles the head of a turtle. How did he come to that conclusion after examining the figure for two hours Wednesday? "The most significant (feature) is something I interpreted as tool marks...They are shown at a well-protected location and are not easily destroyed by weathering or erosion processes," Law said Friday. Simply put, he looked far back into the mouth. • In April, an archaeologist was skeptical. Law's conclusion is exciting news for Morgan, who unearthed the rock in his yard near the Little Miami River in April. "We now know what we have is an artifact without a doubt...a relic," he said. Morgan, who runs a canoe livery, is convinced that the 220-pound rock was left behind by American Indians who once inhabited the area. But, Law can't say when the tool marks were made or by whom. That's for an archeologist to figure out, he said. His job, as a geologist and specialist in petrology - the branch of science that deals with the composition of rocks -- was to find evidence that the rock was altered by something other than nature. Whatever the case, Morgan's find has sparked curiosity among professionals and amateurs who study rocks. Law said he may present a paper on the turtle rock in October at the annual meeting of the Geological Society of America in Portland, Oregon. "This thing is just so damn big and obvious. You look at it and immediately it says 'animal head,'" said Alan Day, a retired engineering consultant in Cambridge, Ohio, who considers himself an amateur archeologist. Day spends much of his retirement studying the many artifacts he's found on his hilltop property since 1987. He has featured information about Morgan's turtle rock on his Web site, http://www.daysknob.com/. Day said he has heard from people all over the United States and Europe who have found similar but smaller artifacts. "The bottom line is that people thousands of years ago were constantly carving very simple images into rocks," Day said.
Posted by Jan at 9:51 PM

...that is a turtle/tototl(N)=
bird, but turtle included as
it's oviparous reptile like
a hen, however, to(r)tuga(sp)=
toto(r)ca/ga(letra)=the frequentive
of toca(N)=totoca(N)=seed and seed,
sow and sow again. the word in
nauatl=ayotl(N)=heart/yotl atl/
of water, e.g., ayotli(N)=zucchini,
but, squash=quaxicalli(N)=head/
skull, xicalli(N)=gourd, quaitl(N)=
head= calabash/calabaza(sp),
notice the scramble. squash is
an alkonquin word, a(l)coquetzi
(letra)=acoquetzi(N)=get on top/
coquette/co(n)quer, or simply,
a(l)coqui(N)= aco/ago who/qui,
aco(N)/ago means from on high,
used in japanese as, ko-(J/pfx)
for words of elevation, and
adressing the royal family.
the a(l)konquin thought well
of themselves.
in any case, the turtle,
ayotl(N) is listed as one of
the roots for judea, and from
what i gather, refers to the
turtle/ayotl neander who settled/
cetilia(N) around mt. ca(r)mel/
camiliui/camileua(N)=to ripen
(fruit), and in tepeua/hebrew,
ca(r)mel=fruitful, also gives
the name to camel, fruit of the
desert, who is yellow, the color
of ripeness. ayotl neander had
a diet of 40% turtle, but ayotl
did not die out as neander and
neandra were in small groups,
100k bc, having left their euro-
caves. the linguistic evidence
of hebrew/ h/th/tep/b(r)e w/ua
(letra)=tepeua is one of the earliest and complete contacts
with pie nauatl. the parallel
root for the name=yuhti(N)=
from the beginning=yuh(s)ti(letra)=
justice/judy/yu(r)t, and possibly,
yeti(tibet/tepetl)=neandra.
the word, yu(r)t points to a
eastern origin, or perhaps
contact with mongolia along
the silk trail. as co(n)querers/
acoquetzi(N)= on top of egypt,
they were known as the hyksos/
h/th/tec/k(letra)=tecpatl(N)=
arrow, and, -sos=s/tzo-t/z/s
(letra)= tzotzoyotia(N)=
sosoyoti(letra)=society=
to put beads/popcorn on a string.
they were the tech/arrow society,
who used iron, chariots, and
laminate bows. there are other
etymologys but not to as fine
a point as this sourcing of
sound and memory. one has to
remember it was largely an
oral society and words had
to define themselves to
memory's design, cf., 13-26,
tzopilotl wordpress. tks