Antiquities Fraud Abounds on the Internet 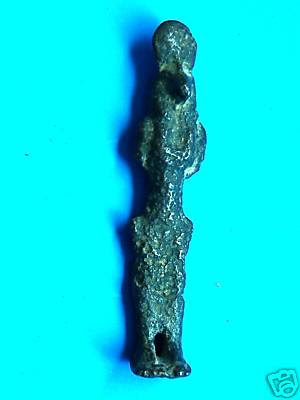 Story from The Los Angeles Times 'Ancient' artifacts, cyber scams Archaeologists and legitimate antiquities dealers warn that most EBay sellers are duping bargain-hunters looking to buy a piece of the past on the cheap. By Mike Boehm May 29, 2009 When Charles "Chip" Stanish, director of UCLA's Cotsen Institute of Archaeology, craves a good laugh over human folly, he knows it's just a mouse-click away, on EBay's crowded bazaar of ancient artifacts. A reddish clay pot in the shape of a man's head pops onto the computer screen in his office beneath the campus' Fowler Museum. Stanish notes its wide-eyed, gape-mouthed face and tries to stifle a laugh, but there's no helping himself. The tousle-haired anthropologist, who researches ancient commerce and communal life in the mountainous Lake Titicaca region of Peru, is slain again. "Look at this stupid face with the stupid grin," he says. "The teeth are ridiculous. The eyes are goofy. . . . It's something you'd find at the Lima airport," selling for a few bucks. On EBay, the seller is advertising it as a mint-condition artifact of Peru's Nazca culture -- a depiction of a warrior, possibly 2,000 years old. It's yours for $499.99, satisfaction backed with a "lifetime guarantee," as long as that lifetime expires within the 14-day window for returns. Customers have given this seller a satisfaction rating of nearly 100%. "Oh, I have such a good time," Stanish says. "Sometimes I put it on my TV, and my friends and I have some glasses of wine and crack up." Rest of article. 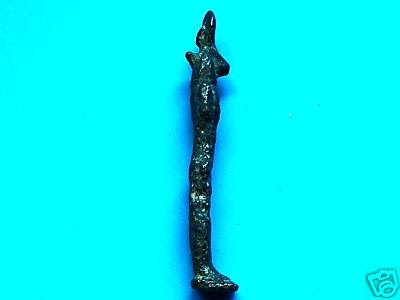 Just for the heck of it, I did a quick search at ebay for antiquities and located this "bronze figure amulet/Ra genuine." It is said to be 5.7 cm in height. No representation is made as to the age of the piece. Now darlings, I'm sure no expert, but after taking a look at this two times, I decided that if it is anything, it's an amulet of Sekhmet, the Goddess in the form of a lioness (an aspect of Goddess Hathor), and is not Ra, although there is a connection because Ra was Sekhmet's father (Sekhmet was one of the "Eyes of Ra"), if memory serves. About the first image above, it could be said it is at least questionable as to what god or goddess the amulet is meant to represent, given what I consider its poor condition; the second image shows a side profile of the amulet and indicates to me the distinctive profile of Sekhmet, along with the remains of her Sun crown enclosed by the Uraeus. For a comparison, check out the images at the Wikipedia entry on Sekhmet. I suppose just because I think it's something other than Ra doesn't mean it's a fraud. I also point out the poor condition of this piece of bronze. I've only seen photos on the internet and in catalogs and books and also in person at the Metropolitan Museum of Art and the Brooklyn Musem of Art (fresh in my mind as we returned from New York on May 19th), so I'm no expert on what the condition of an "ancient" Egyptian bronze should be, since the only ones I've seen have been in generally good condition, considering that most of them came from inside tombs. Perhaps this bronze amulet was owned by a camel herder and had a really rough life, being caught in sand storms and such. Or perhaps it came out of a really bad mold and was then suitably "antiqued" to look like something that might be 2,000 or more years old. Only the Shadow knows... For reasons that I believe will be clear to my readers, I'm not providing a link :)
Posted by Jan at 7:47 PM