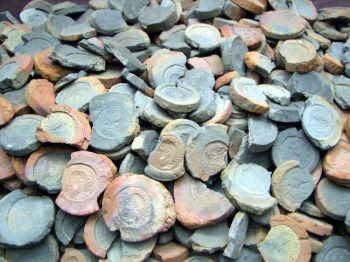 A further take on a subject I posted about a few days ago. (Image from article: Forms to cast fake 2nd to 3rd century coins found in Trier, Germany. Chris 73/Wikipedia licensed under CC-BY-SA 2.5) EBay Changing the Face of Antiquities Trade By Kat Piper, Epoch Times Staff May 30, 2009 With the launch of online auction website eBay over a decade ago, archaeologists feared that antiquities trafficking would suddenly become much more accessible and lead to increased looting of ancient sites. But in fact, eBay has inadvertently created a vast market for fake artifacts, according to Dr Charles “Chip” Stanish, UCLA professor of Anthropology and expert in Andean archaeology. Dr Stanish has followed items listed as antiquities on eBay for nine years. He has also worked with the US customs service and visited workshops in Peru and Bolivia that specialize in making reproductions of pottery. Rather than investing energy in looting, “[Greek], Chinese, Bulgarian, Egyptian, Peruvian and Mexican workshops are now producing fakes at a frenetic pace,” writes Dr Stanish in the May/June issue of the journal Archaeology. “People who used to make a few dollars selling a looted artifact to a middleman in their village can now produce their own ‘almost-as-good-as-old’ objects and go directly to a person in a nearby town who has an eBay account,” he said. “They will receive the same amount or even more than they could have received for actual antiquities.” The proliferation of fakes has depressed the value of real artifacts, acting as a further disincentive to looting, said Dr Stanish. When he first started tracking eBay sales of South American antiquities, Dr Stanish estimated that the ratio of real to fake artifacts was 50:50. Five years later, 95 per cent were fakes. But the quality of the fakes has improved so much that Dr Stanish admits that he can’t always tell. He estimates that about 30 per cent of objects currently listed as “antiquities” are obvious fakes and only 5 per cent are genuine. Modern forging techniques are so good nowadays it is “almost impossible” or prohibitively expensive to authenticate objects using current methods, said Dr Stanish. As long as there are people willing to buy the “genuine” Peruvian Moche pottery, currently being sold for as little as $US160 on eBay (a real pot is worth about $US16,000), the trade will continue to flourish, as will the quality of reproductions. Looting, which is illegal, is the bane of archaeologists because looters rarely remove artifacts using appropriate scientific methods, or record where they came from, so make the objects harder to date and break their valuable link to the wider context of the site and cultural heritage.
Posted by Jan at 10:54 PM

...for fraud you have to use freud,
get into the mindset of the piece.
most frauds are blanks, have no
message. for a piece to be valuable, it has to have a message,
transmit, cleave the viewer's
mind like a spear. trust your feelings, not the sales pitch.
great pieces talk. the best fakirs
are the italians, then the germans,
why? because they were fooled
by musselini and pitzler, and
want revenge on the rest of the world. don't fall for a national
pychosis. tks