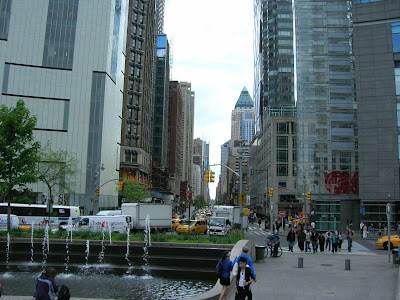 One of the things I love about Manhattan is that, wherever, I turned, there was one fabulous building after another and one fabulous street scene after another. The juxtaposition of so many different types of architecture is a never-ending source of delight. Too, the city is filled with never-ending streams of people, taxis, private cars, delivery vans and trucks, buses, and lots of noise. The energy is contagious - but wearing. Columbus Circle is one of my favorite spots, for it's lovely, cooling fountains, lots of benches and places where people can sit, and the grand panorama that only a circle can provide in this grand city. I took TONS of photos, thank goddess for digital cameras! Some didn't turn out, unfortunately, either because the image was blurred or I wasn't happy with how the subject of the photo was framed. Among the four of us (Michelle, Isis, dondelion and I), I downloaded 907 photographs from our memory cards the afternoon before dondelion and I left! I've been going through the downloaded images and deleting duplicates, not so good shots and rotating and cleaning up others (mostly lightening them). 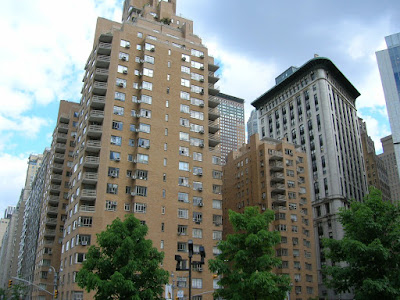 Anyway, here are some shots I took the night dondelion and I arrived (May 12, 2009). We checked into the hotel and went out almost immediately! We walked and walked. I took these photos from Columbus Circle, which is just a couple of blocks up 7th Avenue from the Wellington, where we stayed. I'm very proud of these photos. 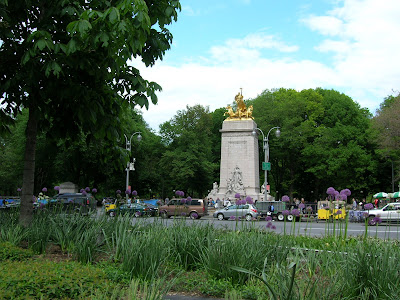 Unfortunately, none of the photos that I took of the golden statue that sits at one corner of Central Park turned out - and I deleted all of them. The photo included here was taken by dondelion at the same time I was busy snapping away in my failed attempts! He takes forever to take a photo, he still acts as if he's snapping on a film camera and therefore each photo is precious! He drives me crazy because he just won't TAKE THE PICTURE, TAKE THE PICTURE (Audrey Hepburn to Fred Astaire, "Funny Face"). He's lost countless great photos of the three Goddesschess goddesses, for instance, by dinking around. But he did good on this photo - far better than any of my blurred and off-centered attempts!
Posted by Jan at 7:43 PM