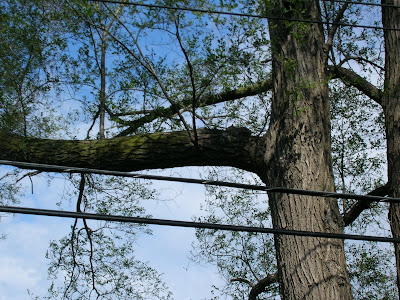 Last night I noticed a very small squirrel along the north fence line, with an obvious injury on his right leg, which he was dragging. I don't know if he got clipped by a car or tangled with a predator and escaped. The poor little guy was obviously spooked, and when he saw me peeking out at him from the patio door he gimped away into the underbrush that my neighbors have piled up on the other side of the fence. It's so thick and deep it would be pretty much inpenetrable to predators like a hawk or a cat. I felt horrid seeing the little guy in that condition. I tossed some peanuts and almonds as close to the fence line as I could from the patio door without stepping out on to the deck or approaching the fence, hoping that the squirrel would come out later on when the coast was clear and eat. This morning about 8:30 a.m. I noticed the little gimpy guy, so he survived the night. As far as I can tell, the injury on his right hind leg has scabbed over, but he's still dragging it. It may be broken, which does not bode well. He was having a very tough time climbing around the base the big tree that I can see outside my kitchen window. He was staying very close to the base of that tree where some of the bird seed lands every morning when I toss a cup-full of it off the end of the deck for the birds. Trying not to spook him, I took a handful of peanuts and a handful of almonds and tossed them, one by one, toward the base of the tree, being as quiet as I could and trying no to show myself from the patio door. I could see him but the deck is elevated above the area where he was but because of a railroad tie retaining wall behind part of the massive tree trunk, I do not think he could see me. Later I noticed that he had managed to climb up to a limb high above the yard, out of harm's way. I do hope he got at least some of the nuts I tossed out. This is a picture of him up on that tree limb. It's not as clear as I'd wish, and although I had the close-up x 3 on, it didn't seem to work on the shot. Drat! You can barely make him out as a sort of lump near the intersection of the limb and the trunk. I think he was sleeping in the sun when I took this shot. I figure he's pretty exhausted. I do hope he makes it. He's very small, smaller than the other "baby" squirrels in the yard who have grown a great deal over the last 4 weeks, so I don't think he's from a nest in one of the trees in my yard (two nests, both birthed about the same time), but he is familiar with my yard as a food source so he must come from somewhere nearby. Update (11:50 a.m.): It's almost a couple hours later and he's not up on the limb any more. I don't know where he got off to, unless he's sharing the next with the bigger "babies" further up the tree. I have to go out now and cut the grass, I will check around the base of the tree and hope I do not find a small dead squirrel. If he is alive, I'll see if I can get a better picture of him.
Posted by Jan at 11:32 AM