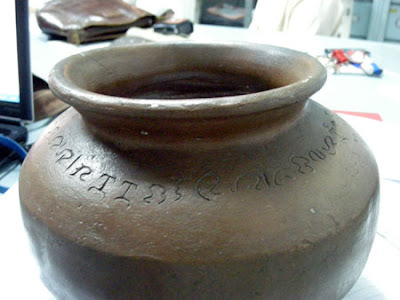 (Image: Calatagan pot) This is a fascinating story. The artifact in question is dated to between the 14th and 16th centuries (700 to 500 years ago) - not that old in terms of archaeology. But for years no one had any luck trying to render the inscription into a comprehensible message in modern language. How quickly the old languages seemingly passed into oblivion once Spanish took hold in the Philippines. Inquirer Visayas The mystery of the ancient inscription By Rolando O. Borrinaga First Posted 02:11:00 05/23/2009 Filed Under: history AFTER 50 years of enigma, the text inscribed around the shoulder of the Calatagan Pot, the country’s oldest cultural artifact with pre-Hispanic writing, may have been deciphered as written in the old Bisayan language. Diggers discovered the pot in an archeological site in Calatagan, Batangas, in 1958. They sold it for P6 to a certain Alfredo Evangelista. Later, the Anthropological Foundation of the Philippines purchased the find and donated it in 1961 to the National Museum, where it is displayed to this day. The pot, measuring 12 centimeters high and 20.2 cm at its widest and weighing 872 grams, is considered one of the Philippines’ most valuable cultural and anthropological artifacts. It has been dated back to the 14th and 16th centuries. The inscription puzzle Sometime in the early 1960s, the National Museum sought help from sculptor Guillermo Tolentino, the National Artist who produced the University of the Philippines (UP) Oblation, in deciphering the inscription on the pot. He was known for his fascination with the ancient Tagalog “baybayin” (alphabet). However, Tolentino’s output was set aside on scientific grounds. It was allegedly achieved through seance—he supposedly invoked the spirit of the ancient pot maker and asked him for the meaning of the inscription. According to Tolentino’s translation, the pot was an offering of a son or daughter to a dead mother. Through the decades, other scholars had tried to decipher the inscription. Among them were Juan Francisco, Jean-Paul Potet, Antoon Postma, Harold Conklin and Johannes de Casparis, known experts in the field of paleography. But no one was able to produce a transliteration, whether complete or partial. Only Francisco (in 1973) and Potet (in 1983) had come up with more or less complete symbol equivalence. But they failed to determine the actual language. Previous attempts at transcription faced three seemingly insurmountable problems: -- Equivalents of many symbols are unknown. --Language used is unknown, although the possibility of Tagalog or Mangyan had been proposed. --Even if the symbols are successfully identified, it is difficult to determine the start and end of words, as well as the final consonants of certain words. Recent attempts Early this year, Prof. Ramon G. Guillermo of UP Diliman published results of his attempt in a paper titled “Ina Bisa Kata: An Experimental Decipherment of the Calatagan Pot Inscription,” which has been posted in the Internet. He said he used paleography, cryptography and “brute force” to crack the code and decipher the symbols around the mouth of the pot. He approached his task by transcribing in clockwise direction starting from the character at the break of the circle of symbols, similar to what Francisco and Potet had done. In March, Guillermo released the following translation of the text: Sinikap sabihin ni ina / Para sa iyo mahal kong anak / Kumain ka sa aking dulang / Dibdib ko ’tong mabango / Doon ika’y mabasa / Tulad ng bulaklak His version carries a mother’s endearing message to her beloved child, the opposite of Tolentino’s interpretation. But although the methods that Guillermo used were deemed scientific and technical enough in academic circles, and his output was declared “most definitive” in an Internet feature story, some sectors have lingering doubts about the final revelation. These doubts prodded me to contribute my effort to resolve the issue. Rest of article.
Posted by Jan at 11:33 AM

...dakit/tree=adirondak(amerind)=
dag(mideast/=mountain=d/t/tlaca(N).
larch(tree)=t/la(r)c/ch=tlaca(N)=
body. borrinaga's version seems best. the phillipines uses the same primitive particle nauatl that omotic(ethiopia)and zhauang
do, cf., tzopilotl wordpress.
guillermo's version included
anak=nak=nacatl(N)=flesh/meat.
when i read that i thought it
was the pot talking to itself about its duties. we can discard
the son/mother dialogue and go
with borrinaga. offhand i can
see particle nauatl here, but would
have to gloss the appropriate wordbank to have a better idea.

It's really have many mysteries that can be seen in many places. Good thing that a pot like this was found here in Calatagan. I studied in Cuenca and saw some artifacts too. I really like things like this. Nice Blog

...hi, misa, calatagan means
entrance=cala-tlacanamaca/
tlacanamacac(N)=selling of men/
slaves, tlacanacatl(N)=human flesh.
so calatagan was used as entrance
to a slave port. can you confirm this? or perhaps it's so long ago
it's time out of mind.
cue(n)ca=cue(N)=skirt, usually,
chalchiuitlicue, goddess of water,
jadeskirt, ca(N)=being, the (n)=
Nauatl/4water, or just 4=naui(N),
of course in spanish, cuenca=
river basin. the word cue(N) is
used in shorter form, cu, to mean
te(m)ple=tepetl(N)=mountain, but
only in the huasteca/cue-xteca
on the río verde=chalchiuitlicue
where the mayans, the 2d coming of
quetzalcoatl, settled and built
their small pyramids along the
river verde/chalch=ch/halc/ch
(letra)=halcón, the totem bird
of the goddess of waters. in
nauatl, cue(n)ca=skirt being=
río, lago=tlaca(N)=lake.
the first quetzalcoatl arrived 3309bc, before pyramids, the first was saggara, egypt, c.2667-2648bc, dhoser's step pyramid.