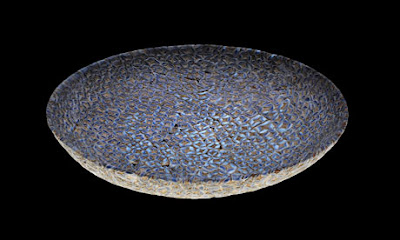 Story from the Guardian.co.uk Unique Roman glass bowl found in east London grave Maev Kennedy The Guardian, Thursday 30 April 2009 It was only when the archaeologists lifted the bowl delicately from the grave and the light shone right through - before it disintegrated into a mass of brilliantly coloured fragments - that they realised they had something extraordinary: a glorious Roman glass bowl, probably made in Alexandria almost 2,000 years ago, whose travels ended in a pit in east London. The find is unique in the western Roman empire. All glass was precious in the ancient world, but Jenny Hall, early London curator at the Museum of London, said the bowl would have been fabulously expensive when made by the millefiori - thousand flowers - technique. Tiny brilliantly coloured glass rods were fused together, then sliced across like Brighton rock and fused again to form the vessel. Older but much smaller bowls have been found, but nothing comparable to this soup plate-sized discovery, believed to date from the 3rd century AD. The Corning Museum of Glass in New York, the world's largest collection, has just a few fragments of a comparable bowl. Liz Goodman, one of the most experienced conservators at the Museum of London, spent weeks cleaning the fragments and piecing them together with transparent adhesive which should last another century. The bowl was kept wet as found, while she worked on it. On her last few days she gently allowed it to dry out - and watched sadly as the brilliant red and bright blue faded because the outer surface had corroded in the soil. It was found towards the end of a three-month excavation of a site at Prescot Street in Aldgate, part of the great cemetery on the eastern outskirts of the Roman city, only a fraction of which has been excavated: the 3,000 square metre patch was one of the largest recent stretches uncovered. It was held fractured but upright and complete by the pressure of the sodden soil around it. The site was flattened in the Blitz and then spent decades as a surface car park, preserving the archaeology. The bowl is believed to have been placed on a wooden box holding the cremated remains. Only the metal fittings of the box survived, surrounded by other pottery and glass vessels rare enough to be an exciting find even without the bowl. "When we found it it was so unusual we really didn't know what we'd got - I thought first it might be the edge of a piece of enamelled metal," Guy Hunt, director of LP Archaeology, said. "It was only as we lifted it clear from the soil and the light shone right through it that we knew. Then it fell to pieces, which was a bit of a bad moment." The bowl has been given to the Museum of London, and is on display at its Museum in Docklands branch.
**************************************************
Is there a reason why the bowl cannot be kept wet somehow, so that the brilliant colors of the glass will once again shine through? Perhaps it is not technologically possible, and I suppose it would not be acceptable to coat the bowl with some kind of substance that would mimic the shine that water would give to the surface of the glass. Oy! I can just imagine the feelings of the person holding the bowl right after it came out of the ground, intact, and then disintegrated in front of his horrified eyes!
Posted by Jan at 11:03 AM