It's an intriguing little piece - unfortunately I could not find a better photo of it, and I do not know if it is a female or a male. 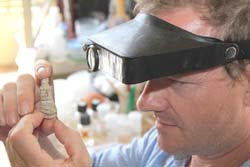 (excerpted) SIDON: The British Museum delegation announced on Tuesday that it has discovered significant archeological remains in Sidon, during the 12th year of excavation project.

The delegation has been working on the College excavation site in the southern coastal city of Sidon for 12 years, with the cooperation of the Department of Antiquities of Lebanon. It has recently uncovered new items that link various historic eras together.

“In this small site we have a chronological succession of various eras … Each year we discover new rooms,” said the head of the delegation Claude Serhal.

Work carried out since June 19 of this year has uncovered two new rooms in a 10-room building dating back to the third millennium BC. In one of these chambers the team found a small figurine and a small container with a broken handle.

The statuette of a human figure represented in prayer had special importance, according to Serhal, because it was “the first time we found a complete statue of a worshiper dating back to the third millennium BC.”

The figure was wearing a long dress, with hair indicated by incised lines. Its arms were bent in front of the body suggesting a respectful pose.

“This is a major discovery because we’re learning more about the third millennium BC,” Serhal said, adding that pictures of gods were also found.
Posted by Jan at 8:42 PM