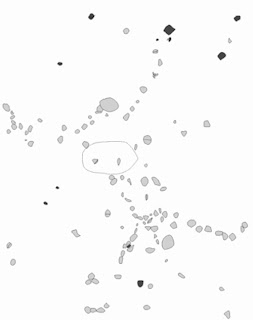 A stone effigy monument, in the shape of a Blackfoot creator god named Napi, has been discovered in southern Alberta – south of the Red Deer River near the hamlet of Finnegan.

One day Old Man determined that he would make a woman and a child; so he formed them both – the woman and the child, her son – of clay. After he had moulded the clay in human shape, he said to the clay, "You must be people” ...


They walked down to the river with their Maker, and then he told them that his name was Na'pi, - Old Man.

Blackfoot stories mention effigies like this. In 1892 anthropologist George Grinnell published a story about Napi, that he - Made the Milk River (the Teton) and crossed it, and, being tired, went up on a little hill and lay down to rest. As he lay on his back, stretched out on the ground, with arms extended, he marked himself out with stones,--the shape of his body, head, legs, arms, and everything. There you can see those rocks today.

I'm not sure I "see" the figure of a man in the diagram provided in the Heritage Key article - can't find the head, for instance, but after comparing this figure to those provided in the Google excerpt from Liz Bryan's book, I can "see" the legs and the very large phallis between then, which has to be supposed is only fitting for a creator/father god.

They fled upwards in the night-time. They threw an arrow (upwards), and it became a road. They fled along this road.

Those came again. "Halloo! have you not some blubber?" But there was no answer. "Let us jump in! They are hidden somewhere." They entered, and searched in all the corners. There was nothing.

Finally they both died, and lay there. His head slipped into her anus [again?]  After a while (the fugitives) said, "Let us visit the house!" They visited it, and dragged out his head with an iron hook, and his head had become (quite) hairless.

"Oh, oh?" They threw them into the direction of the sunset. Then they lived and were happy. They were not (molested) by spirits. That is all.

3. Literally "let us act with the grandmother". The word "grandmother" is used also for "divining-stone" (Cf. W. Jochelson, The Koryak, l. c., p. 44). p. 81 The reason is probably that divination with stones is chiefly practised by women, and that the divining-stone, though usually a round pebble or a piece of bone ornamented with beads and tassels, represents a female guardian of the family.

4. Literally, "without shame". "Shame" for "fear" is used also in the Chukchee (Publications of the Jesup North Pacific Expedition, vol. viii, No. 10, p. 61 footnote 1.

Is Na'pi the same god as the trickster/spirit Kamak in the Koryak tale, or are they perhaps related?  Na'pi is "Old Man;" Kamak is "Grandfather" - and "Grandfather" can be another term for "Old Man."

The use of objects suspended from a string to "divine" something is still used today, right here in Milwaukee, Wisconsin!  You can file this away under what are popularly called "Old Wive's Tales" - hmmm....

We have another baby shower coming up - I'm going to be a great-aunty again - I've lost count, egoddess! So I may be called upon once again to try my hand (ahem) at divining the sex of my next great-niece or great-nephew.
Posted by Jan at 7:50 PM