Discoveries from Yet Another English Henge

This one is Marden Henge -- you can find a model here. It's located about halfway between Avebury and Stonehenge.  The diagram below is from The Modern Antiquarian. 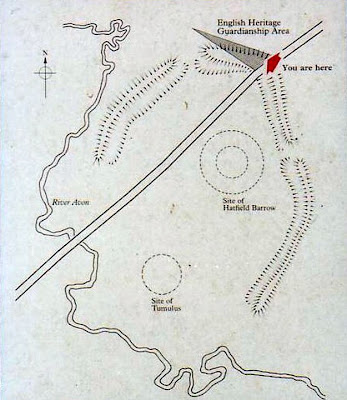 Archaeologists have unearthed a prehistoric henge at Marden, near Devizes, where worship, business and feasting would have gone on 5,000 years ago.

The discovery at Hatfield Farm, never before investigated, has excited the world of archaeology and is more impressive than the recent finds at Stonehenge.

The area under investigation comprises a circular bank and ditch, the distinctive indications of a henge, built by neolithic people between 2500BC and 2300BC, contemporary with Stonehenge, Avebury and Durrington Walls.

The team led by English Heritage archaelogist Jim Leary have been bowled over by their discoveries.

Mr Leary said: “All the literature on this area would lead you to believe it was ploughed out but in fact it has never been ploughed.”

The excavation on top of the bank has unearthed the foundations of a rectangular building with chalk walls.

Mr Leary said: “This would not have been a residence. It could have been a place of worship or a communal building.”

The team also discovered a midden, or rubbish tip, with evidence of great feasting. The 5,000-year-old bones of pigs, some still attached to each other, have been found in perfect condition.

TV archaeologist Phil Harding of Channel Four’s Time Team, who visited the site on Friday, said: “This is amazing. You can see it all there. It accentuates how valuable the work going on here really is.”

Artefacts discovered include a perfect flint arrow head, a stone hammer or pestle and a small red stone worn very smooth, thought to have been used to work leather or burnish pottery.

At the centre of the site, about 200 metres from the henge, the team are having slightly less success with the area where a mound claimed to have been 15 metres high, half the height of Silbury Hill, existed until the early 19th century.

Mr Leary said: “William Cunnington and Henry Colt-Hoare, who were among the first archaeologists in Wiltshire, drove a shaft straight down the centre of it in 1806.”

Two days later the shaft collapsed. An antiquarian writer passing a few years later was distressed to see the farmer had levelled the site.

But the English Heritage team are still finding valuable information from the trench they have dug.

Archaeologists believe the finds are far more significant than the wooden henge discovered at Stonehenge last week. They say that, far from Stonehenge existing in glorious isolation, it has long been known it was part of much larger complex of henges and burial sites.