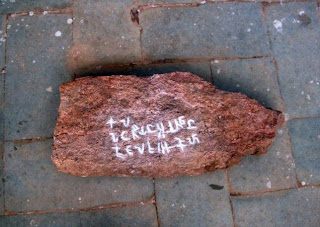 Ten memorial stones, six of them with Kannada inscriptions, have been discovered at near the hills close to Kondaharahalli village, six km west of Bommidi in Dharmapuri district, Tamil Nadu. All the stones have identical sculptural representations and belong to the 10th century C.E. (Common Era).

According to Dr. K. Rajan, head, Department of History, Pondicherry University, the memorial stones were erected in the Tamil country between the first millennium B.C. and the Vijayanagara period (16th century A.D.), in memory of men who were killed in cattle raids or when they were attacked by a tiger or an elephant. These stones are different from the hero stones: the latter were erected to honour valiant men killed in battle, or those who lost their lives while defending their villages or womenfolk. The hero stones are called ‘nadu kal' in Tamil. (Images: Memorial stone says that the stone was raised in memory of a man called Tiyan Antavan of Pedu village, who died during a cattle raid that took place in another village called 'Kudal Ur." Photo by K. Rajan.  Below, a transcription of the text on the memorial stone.) 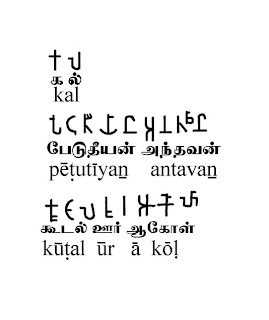 The earliest memorial stones were the Iron Age burial monuments put up between 1,000 BCE (Before Common Era) and 3rd BCE. They were in the form of cairn circles, stone circles, cist burials, dolmens, menheirs and anthropomorphic figurines. Such memorials were found all over India.

The Kondaharahalli stones were discovered a few months ago by R. Ramesh, assistant archaeologist, Archaeological Survey of India (Chennai Circle) following information he received from C. Chandrasekar, lecturer, Government Arts and Science College, Dharmapuri. The first stone has a carving of a man holding a bow and a sword. He is shown with arrows piercing his neck and abdomen. On his left, four animals are portrayed, which represent a cattle raid. Above the hero, there is a small sculptural representation that shows him in a seated position with two apsarason either side. There are three horse riders at the foot of the hero. One of them has an umbrella above his head, denoting that he is a chieftain or a leader, explained Dr. Rajan. An eight-line inscription is found engraved in Kannada characters and refers to a hero called Macayya, son of Hocayya, who (Macayya) had a title called Sarasatti-karakandarpa. He died in a cattle raid that took place when Sabhatukadeva, son of Byaliciradeva, who belonged to the Pallava line and bore titles such as ‘Pallava-kula-tilaka', ‘Sri Piruthuvi-vallabha', ‘Kanchipura-paramesvara', ‘Sri Manipathi-raja' and ‘Jagadeka-malla', was ruling the region.

The stones showed that linguistic borders did not exist at that time (10th century C.E.). People who spoke different languages moved about freely from one area to another, Dr. Rajan said.

The stones have undergone distinct changes in size and substance over a period of time. The earliest of them were big in size and were erected mainly for men who lost their lives during cattle raids, that is, while trying to steal cattle from other villages. The stones metamorphosed into hero-stones, which were installed to commemorate a heroic act – his dying in a battle or while trying to defend his village from intruders and so on.

S. Suresh, who belonged to Pulimaankombai, found these hero stones. They were lying in his father's field for a long time and Suresh discovered to his delight that they had inscriptions too. When research scholars S. Selvakumar and V.P. Yatheeskumar, working under Dr. Rajan, who was then Head, Department of Epigraphy and Archaeology, Tamil University, Thanjavur, were on a field visit to Pulimaankombai, they learnt about the existence of these stones. While Dr. Rajan said the Brahmi inscriptions of Pulimaankombai could belong to a period prior to 3rd century B.C., other specialists said they belong to 2nd century B.C. The stones, about three feet in height and about one to 1.5 ft wide, were probably installed as part of the urn burials, which are found in the area. According to Dr. Rajan, the first of these hero stones has three lines in Tamil-Brahmi, reading ‘Kal pedu tiyan antavan kudal ur akol.' This meant that this stone was raised in memory of a man called Tiyan Antavan of Pedu village, who died during a cattle raid that took place in another village called Kudal Ur, which could be identified with the Gudalur area near Cumbum.

The second hero stone's inscription reads as: ‘(a)nur atan (n)an kal.' The stone was erected in memory of a person named Atan who belonged to a village. The third inscription reads: ‘Vel ur patavan avvan.' This stone was put up in memory of Patavan Avvan of Vel Ur. The characteristic feature of the early Tamil language tradition was the separate writing of the grammatical suffixes beginning with vowels without being enjoined to the main word. Thus ‘Vel Ur' and ‘Kudal Ur' were written separately. In modern Tamil, they are written together as Velur and Kudalur. This language tradition was followed in these three hero stones.

Dr. Rajan said, “Palaeographically, orthographically and linguistically, these hero stones are considered to be the earliest. They are, therefore, important in the study of the early historic period of Tamil Nadu.”

At Thathapatti, just a few km from Pulimaankomabi, was found another hero stone with a Tamil Brahmi inscription, reading ‘n ation pakal paliy kal.' More important, this was engraved on a menheir. This menheir, which was erected on a grave, entombed an urn. (Both Pulimaankombai and Thathapatti are situated on the banks of the Vaigai).

The Tamil Sangam literature (2nd century BCE to 2nd century CE) has clear references to sepulchral monuments raised in memory of heroes. Subsequently, ‘nadu kals' or hero stones were planted as part of the burial and this has been described by more than 25 Sangam poets.

“These references clearly suggest that hero stones were installed with inscriptions during the Sangam age. However, such inscribed stones were eluding archaeologists till the Pulimaankombai discovery. These four discoveries corroborate the literary descriptions,” said Dr. Rajan.
Posted by Jan at 11:57 AM