Back in October 2002 enroute to Madrid, Mr. Don and I had about an 8-hour layover in London.  We arrived there about 7 a.m. in the morning - on a weekday.  Eventually, after some arguments and a comedy of errors involving Customs, we figured out where to catch the "Tube" that would take us to Picadilly - PICADILLY!

A few stops after Heathrow, which back then was in the midst of major renovations (I don't think it's ever NOT been in the midst of major renovations, come to think of it...) people going to work starting piling on.  But Mr. Don and I were firmly ensconced on a sort of mod-print purple seats and the Tube obligingly announced it stops and also showed them in digital displays hanging in the center of the cars above everyone's heads.  It was a smooth, inexpensive ride (I'd been willing to fork over 70 pounds for a train ride into and back but Mr. Don insisted there must be a cheaper way to get to "downtown" London, and he was right).  I found the trip absolutely fascinating.  It was so surreal sitting there, watching these people dressed in work clothes pile on to the Tube while Mr. Don and I were tourists.  Near the end of the trip it got a bit crowded but everyone was extremely polite (is that the English way coming to the fore?) and the Tube car itself was spotless and had no unpleasant smells emanating from any obscure corners or from any person en route.  Thank Goddess! 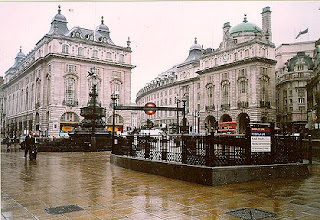 About 9 a.m. we exited Picadilly and wound our way up some stairs that took us to stret level.  It was drizzling outside, but not overly cold.  OHMYGODDESS, we were there!  I, prepared as always (ahem), pulled out my trusty fold-up umbrella.  Mr. Don, unfortunately, had no hat, no hoody and no umbrella, so he got wet. We'd had an inadequate breakfast at some fast food restaurant or other at the airport while we were arguing about the best way to proceed.  [Photo: A shot of Picadilly Tube station as we were looking around after emerging.]  Above and beyond the absolutely amazing sight of Picadilly Circle itself, the first thing we spotted, in unison, as we turned around to take it all in, smiling hugely at each other, was a STARBUCKS!  LOL! 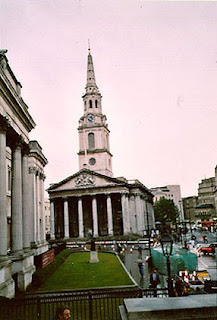 I don't remember any discussion about it, I believe we headed as one toward that Starbucks, both because we were running on empty and needed some coffee as much as needing a place to sit down and study the maps we'd picked up in the Underground and also to receive some local advice about how to navigate about for our hours in town before we would head back to the airport for our 4:00 p.m. flight.

We took in as much as we could.  [Photo: St. Martin's Church, outside the Art Museum fronting on Trafalgar Square.]  We'd predetermined that we would need to head back to the airport about 1:00 p.m. for the hour long ride, that would give us 2 hours to clear customs and security.  As it turned out, I do not believe we had to do anything with customs, and security back then was still patchy at best.  We didn't have our shoes off back then and if I did walk through a metal detector I sure don't remember it.  We didn't have any luggage with us - everything had been checked through to our Madrid flight.  As it turned out, we didn't need to get back so early.  And, unfortunaely, our flight was delayed MORE THAN FOUR FRICKING HOURS.  We didn't leave London until about 8:00 p.m. for the 2 hour or so flight to Madrid.  That's another story entirely --

Oh, I so want to go back.  Just the wee small part we saw of London was so wonderful.  We spent a good hour at least in the National Gallery, for instance, and could well have spent a couple of days there.  Mr. Don was able to take several photos but that was in the pre-digital camera days and since we weren't able to use our flashes none of those photos turned out - it was just too dark.  That's too bad because there were some extraordinary paintings in that museum. 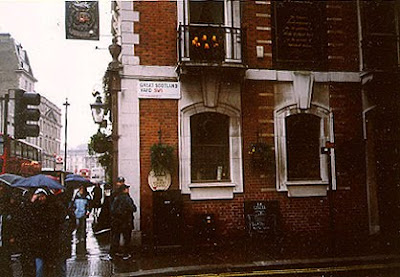 We strolled across Trafalgar Square and I took a photo of Mr. Don by one of the large lions of the Trafalgar Monument.  We strolled down historic streets, including past Scotland Yard, which I got a real kick out of doing.  We headed toward Parliament and Big Ben which we had square set in our sights in the distance, but had to turn around to go back to the Picadilly Tube station at 12:50 p.m. (There's Scotland Yard!)
Posted by Jan at 7:19 PM