Hmmm, is there a song with that title? 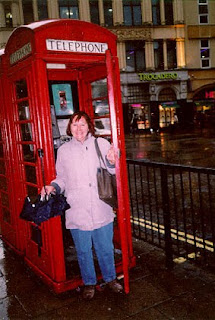 Not the most flattering photo of me, but what the heck - it's London Town! London, oh London...  Does anyone recall the great stage show number that Petula Clark did in the great MGM remake of "Good Bye, Mr. Chips"?  I think Clark went through at least four costume changes in that on-screen musical extravaganza, which catapulted the story of the shy school master and his once-in-a-lifetime-love-affair into 1920's London, transformed into a grand high budget musical with, of all people, Peter O'Toole as Mr. Chips!  I mean, darlings, the IRONY!

But it was a grand movie, updated into an early 20th century love story between the Mr. Chips character as portrayed by Peter O'Toole (and he was a hunk back then, I have to say, and I believe he received an Oscar nomination for that performance), and Petula Clark, who was a pixy middle-class girl with a Giant's Voice!  The song she did at the - actually filmed onsite - Temple of Apollo - I have not forgotten yet.  It was "Apollo"  and morphed into "And the Sky Smiled Too."

There I am with my folding umbrella and my indestructible Laura Ashley bag (I've still got that bag, LOL!) -- Mr. Don insisted that I do this sort of "TA DA!" out of the phone booth, and I more or less obliged him. Long before Harry Potter, mind you!  It's not really visible in this photo but in the background was the Trocadero Club - I mean, the HISTORIC Tracadero Club, the one that set the mode for all the other Tracadero Clubs all around the world.

During the approximately 8-hour flight over to London from Montreal I'd taken off my shoe-boots as we settled in for dinner, a movie, and then fitful sleep.  My feet had swollen up so much during the "over night" flight that the next morning as we were approaching Heathrow to land, I could not get the damn shoe boots back on my feet!  Finally, shoving and mightily heaving and with some assistance from Mr. Don, I was able to get them back on, but not laced up.  The laces came out, and stayed out until 24 hours after we landed in Madrid.  During the long flight back to Montreal which was, I believe, a direct flight, no transfer in London (I was sick on the way back and do not remember much as I was mostly flopped over Mr. Don who carried me around until we got back to Montreal, by which time I was miraculously restored to health -- but that's another story...) 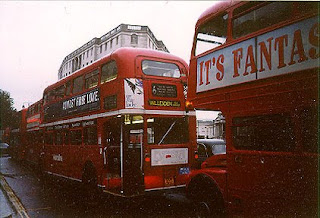 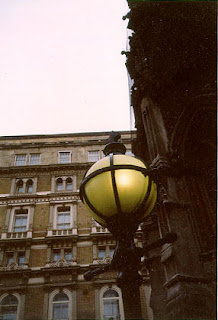 [Photo: buses lined up near the Tracadero Club.]  Of course, we wouldn't be Goddesschess folk if we didn't find evidence of the Goddess throughout our trek, which we did, in plenty.  During our brief sojourn in London Town, we came across Charing Cross Station.  I believe there is some legend that has something to do with a King leaving a sign at a crossroads for his beloved "Cher Regina" which eventually became "Charing."  But I don't believe that for a second - it's just a paternalistic 19th century gloss passing as romanticism.  The original spot was undoubtedly a site of ancient Goddess worship, complete with a temple, sacred mound in the near distance and a sacred spring.  It was a cross-roads from early on because it attracted pilgrims to the holy site from all around England, long before the Romans came and long before the English (actually Norman, and later German) kings and queens were instituted.  The photo (right) is of a lampstand at the parking area right outside Charing Cross Station (which is actually located underneath a hotel, at least it was back in October, 2002).  Notice the "globus cruciger" shape - an ancient Goddess symbol that was later co-opted by the local "God-of-the-Day."  The ancient Goddess symbolism refused to die, however.  For instance, there are many depictions of the Virgin Mary, the Mother of God, standing upon such a symbol.  There are also many depictions of Jesus Christ, the Son of God, holding such an artifact in the palm of his - I believe left hand - whilst sitting on the 'The Mother of God's' lap. 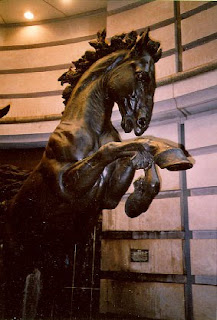 Last, but not least, is this great pic of a horse sculpture captured outside an art gallery near Trafalgar Square.  It was a larger than life bronze, and I was absolutely captivated by it.  Mr. Don took the photo.  It was modelled after one of the famous horses taken from the Elgin Marbles - a large frieze removed in pieces from the Parthenon, perhaps the most famout of Athena's Temples, at Athens, Greece, in the 19th century CE.  A bit of chess history - the "classic" Staunton knight piece, with the horse's lips turned back revealing teeth ready to bite during the heat of battle, with which we are so familiar, was modelled by Staunton's artist after the horses depicted on the Elgin Marbles.
Posted by Jan at 9:14 PM

Another vaugely Goddess related tourist option, available these days, is to take a da Vinci Code walking tour. It includes a look at the da Vinci painting, which is in the National Gallery.