Maya Blue Back in the News 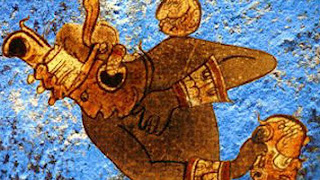 WASHINGTON -- Physicists have created a dye that promises to last for a thousand years. The secret to this extraordinary durability? Its formula is based on a Mayan pigment, a brilliant blue color that survives to this day on the walls of their ancient temples. (Image Wikipedia)

"This pigment has been stable for centuries in the hostile conditions of the jungle," said Eric Dooryhee at the Brookhaven National Laboratory in Upton, N.Y. "We're trying to mimic it to make new materials."

Dooryhee and team of French physicists have spent years studying historical objects using X-rays. They shoot finely-tuned beams of X-rays from a synchrotron machine -- much stronger than a dental X-ray -- at these materials and look at the pattern of scattered X-rays coming out in order to determine the structure of the atoms inside.

The scientists have used this technology to examine Egyptian cosmetics, Roman pottery, and Renaissance paintings. They have recreated some of these ancient materials and are just beginning to learn how to borrow their strengths to make new modern "archeomimetic" materials that can stand the test of time.

Unlike most organic pigments, which tend to break down over time, the pigment Maya Blue is remarkably resistant -- not only to natural weathering, heat, and light, but also to strong acids and solvents in the laboratory.

Pre-Columbian Mesoamericans, who lived in Central America before the first Spaniards arrived, developed the pigment about 1700 years ago. Archaeologists rediscovered it in 1931 at the site of the ancient Mayan capitol Chichen Itza.

The Mayans used the pigment in art and in rituals to bring the rains. Recent evidence suggests they painted sacrificial objects and human victims blue and threw them down a deep natural well called the Sacred Cenote, thought to be the home of the rain god Chaak.

The pigment was made by burning incense made from tree resin and using the heat to cook a mixture of indigo plants and a type of clay called palygorskite. A bowl retrieved from the Sacred Cenote revealed traces of all of these materials, each of which was considered to be a healing substance by the Mayans.

"By offering incense to Chaak, they were combining two healing components," said Dean Arnold, an anthropologist at Wheaton College in Ill. who examined the bowl. "This was ritually significant because the rain healed their land."

Now the physicists' X-ray beams and other measurements have revealed the secrets behind this recipe's remarkable longevity and durability. As the mixture was heated, indigo molecules filled a network of tiny channels inside the clay. Some of these bits of indigo plugged the pores on the surface, preventing the color from escaping over time.

The clay, in turn, protects the indigo from the environment. Harsh chemicals can destroy a sensitive bond within indigo molecules -- changing the color from blue to yellow. Like the double-parked car that prevents you from opening the driver-side door to your own car, the clay channels take up the space around the bond, blocking these chemicals.

After looking for other kinds of clay-like materials with similar structures, Dooryhee and colleague successfully combined indigo with a porous substance called zeolite -- widely used in commercial products as diverse as cement, laundry detergents, nutritional supplements, and cat litter -- to make a new kind of long-lasting blue pigment.

The team hopes to use this new material to restore paintings and is considering other applications such as colored cement, said Dooryhee.
Posted by Jan at 5:19 PM