The Milwaukee Public Museum said Tuesday it will display the largest temporary exhibit of mummies and related artifacts ever assembled in the world when the museum opens a new exhibit starting Dec. 17.

The exhibit, "Mummies of the World," will include more than 150 real human and animal mummies from around the globe.

The [Milwaukee Public] museum is only the second venue to host the traveling exhibit. 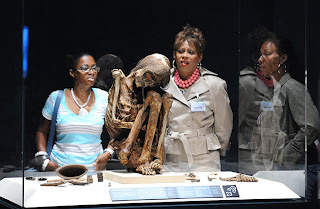 The first U.S. stop for the exhibit is the California Science Center, which will host it through the end of summer.  (Photo from Guardian.co.uk article).

It then travels to Milwaukee -- I imagine it will take over the space temporarily in the Tells, Temples and Tombs permanent exhibit space.

This is a real coup for Milwaukee.  How well I remember the fantastically wonderful "The Quest for Immortality" exhibit back in 2004 - the Museum scored record crowds and had a packed lecture hall most evenings as Milwaukeeans and people from Chicago, Minneapolis, Indianapolis and elsewhere either drove to or flew into Milwaukee to see the rare exhibit.  To score another great event like this is so exciting for the city.  I know Milwaukeeans will turn out for the exhibit.

Of course, it is not just Egyptian mummies featured in this one-of-a-kind exhibit.  There are, literally, mummies from all over the world, all different places, all different times and conditions.  Which makes it even more remarkable and a once in a lifetime opportunity to see it in my own home town!  Check out the photo exhibition in the article at the Guardian to get an idea of the scope of what will be presented.  Amazing, absolutely amazing.
Posted by Jan at 8:04 PM