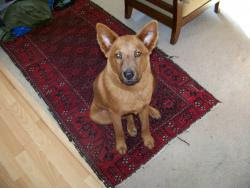 Every dog has its day, but that day took more than 14,000 years to dawn for one canine. A jaw fragment found in a Swiss cave comes from the earliest known dog, according to scientists who analyzed and radiocarbon-dated the fossil. (Image a "yaller dog" - wild dog - from Carolina - this one was bred 'domesticated.'  "Yaller dogs" may have come to the Americas with the first settlers some 16,000 years ago.')

Dog origins remain poorly understood, however, and some researchers say that dog fossils much older than the Swiss find have already been excavated.

An upper-right jaw unearthed in 1873 in Kesslerloch Cave, located near Switzerland's northern border with Germany, shows that domestic dogs lived there between 14,100 and 14,600 years ago, say archaeology graduate student Hannes Napierala and archaeozoologist Hans-Peter Uerpmann, study co-authors at the University of Tübingen in Germany.

"The Kesslerloch find clearly supports the idea that the dog was an established domestic animal at that time in central Europe," Napierala says.

Older fossil skulls recently identified by other teams as dogs were probably Ice Age wolves, Napierala and Uerpmann argue in a paper published online July 19 in the International Journal of Osteoarchaeology. That includes a 31,700-year-old specimen discovered more than a century ago in Belgium's Goyet Cave and reported in 2009 to be the oldest known dog.

Paleontologist Mietje Germonpré of the Royal Belgian Institute of Natural Sciences in Brussels, who directed the analysis of the Goyet fossil, stands by his conclusions. "The Kesslerloch dog is not the oldest evidence of dog domestication," he says.

Numerous wolf fossils lie near alleged dog remains at Kesslerloch Cave and Goyet Cave, raising doubts about whether either site hosted completely domesticated animals, remarks archaeologist Susan Crockford of the University of Victoria in British Columbia. She regards the Swiss jaw as an "incipient dog" in the early stages of domestication from wolves.

Scientists disagree about how and when dogs originated, other than that wolves provided the wild stock from which dogs were bred. One investigation of genetic diversity in modern dogs and wolves concluded that domestication occurred in southeastern Asia, whereas another placed canine origins in Eastern Europe or the Middle East (SN: 4/10/10, p. 12).

Napierala and Uerpmann suspect that, however the DNA studies pan out, they will show where wolves originated, not dogs. In their view, dogs were domesticated from local wolf populations in various parts of Europe, Asia and perhaps northern Africa sometime before 15,000 years ago.

The Kesslerloch dog jaw and its remaining teeth are considerably smaller than those of wolves recovered from the same site, the scientists say. A space between two of the fossil dog's teeth indicates that domestication must have reached an advanced phase at that time, they argue. During initial stages of domestication, jaws shrink in size faster than teeth, producing dental crowding. Later in the domestication process, teeth get small enough to leave spaces.

Canine fossils from Goyet and several other sites older than Kesslerloch Cave fall within the size ranges of modern and ancient wolves, Napierala adds. Relatively short, robust snouts on the older fossils, initially cited as evidence of domestication, may denote an adaptation of wolves to hunting large Ice Age game, he holds.

Dogs older than the one at Kesslerloch Cave were relatively large, although not as large as wolves, Germonpré argues. Those dogs have been unearthed at sites that have yielded huge numbers of mammoth bones. People living in those areas may have used dogs to haul mammoth meat from kill areas and as sentinels, he proposes.

Napierala and Germonpré agree that a resolution of this debate demands the dogged pursuit of additional canine fossils.

See Did Carolina Dogs Arrive With Ancient Americans?
By Brian Handwerk
for National Geographic News
March 11, 2003
Posted by Jan at 9:04 AM