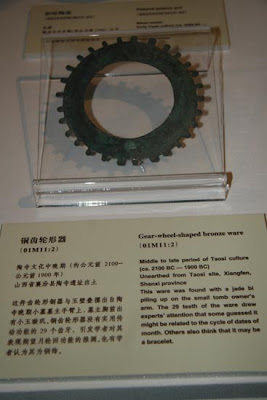 This ware was found with a jade bi piling up on the small tomb owner's arm.  The 29 teeth of the ware drew experts' attention that some guessed it might be related to the cycle of dates of month.  Others also think that it may be a bracelet."

Some bracelet!  The translation to English leaves much to be desired.  Was the object actually found AROUND the wrist or arm of the tomb owner?  Was it laying ON TOP OF the arm of the tomb owner?  A bi, as I understand it, is meant to be worn around the neck, suspended from a silk or leather cord. Perhaps this piece was meant to be worn similarly?  Or perhaps it's not a piece of jewelry at all but is something else entirely -- a piece of something that was used to tell time in some way, perhaps?  The 29 "cogs" that appear to be evenly spaced around the outer rim of the circle are highly suggestive of a lunar month, for instance.

Or perhaps it was used for divination somehow, in conjunction with other pieces of equipment that disintegrated over the thousands of years of burial?  For that matter, would not a cord of silk or leather also have disintegrated away after 3000 plus years?

This object is one of many currently on exhibit at the Capital Museum in Beijing:

China's biggest ever archaeological exhibition is held at the Capital Museum in Beijing on Thursday, July 29, 2010.
"The archaeological finds of the Taosi Site in Xiangfen County of Shanxi Province rewrite history and prove that the beginning of Chinese civilization should be at least 4200 years ago, not 3700 years ago as previously suggested." an expert said during the opening ceremony of China's biggest ever archaeological exhibition in Beijing on Thursday.

The exhibition of over 400 cultural relics, held in the Capital Museum from July 29 to October 10, includes more than one hundred of the earliest archeological finds in China, such as cultivated rice from 10,000 years ago, panicum from 8000 years ago and an ancestor of domestic pigs. Over 70% of the cultural relics are open to the public for the first time.

*****************************************************************
I'm not saying there is any relationship - but the number 29 reminded me of the very old game of Yut or Nyout, which also involves 29 "points" arranged either in a circle or in a square. Here is an example of a Yut or Nyout arrangement. (R.C. Bell, "Board and Table Games from Many Civilizations.")  It is still played in Korea although the origins of the game have been lost in the mists of time and it is supposed that most people no longer really understand the significance of the fact that, for instance, each "point" has its own name. Some people think that the outer rim in Yut/Nyout represents "Heaven" and the inner portion (the 'cross,' around which a square can be drawn) represents "Earth." In the very old old days, long before China was China, this concept of Heaven/Earth was represented by a circle ("Heaven") superimposed over a flat, square plane ("Earth").

I believe the tradition has evolved to Nyout mostly being played on Korean New Year's Day, when one's "fortune" can be told by playing the game -- I have yet to come across an article that explains just how this is done, though. According to Stewart Culin, Nyout was one of several games that embodied a method of divination in which several two faced staves are tossed and numerical counts attributed to their various falls. [T]he game of Nyout is a striking and typical example. In Nyout, as in many similar games of the same order, direction or place is determined by counting around a diagram which may be regarded as representing the world and its quarter. 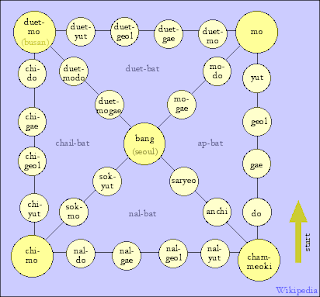 I suppose, therefore, that in order to determine one's fortune, one would throw the sticks to get a count and move a piece onto the "board", and this process would be repeated several times, depending on how many pieces one had to "play." The final result would be "read," i.e., interpreted, based upon which "points" the playing pieces landed on the "board."

The interpretation might get a lot more complicated, though, if more than one person was placing pieces on the "board", perhaps taking turns tossing the sticks to get a count. For instance, if another person's piece landed on your same point - what would happen? Would you have to start over? Would you incur a penalty of some kind (go back five spaces, move to "x" space), perhaps even "death?"

An alternative explanation to divining one's fortune by playing Nyout (or perhaps any similar game, because the roots of all circle and cross games may stem from a single origin) as proposed by Culin is discussed at Board Game Geek:

"Regarding the game of Nyout, Culin writes about how the game can be related to the I Ching. During a special holiday time of the year in Korea, Nyout is played and a special book is used called the zhìchéngfǎ (掷成法-"Toss-win-way"). He also includes an exerpt from the book titled zhìsìzhān (掷柶占-"Toss-spoon-divine"). He makes a connection between this book and the I Ching in that there are 64 possible combinations that can result from the throw of the Nyout blocks and that there are 64 possible forturnes that may result."


While short blocks, pam-nyout, are used by children, and gamblers in cities, in the country, long blocks, called tiyang-tjak-nyout (Chinese, cheung cheuk sz' (長斫柶-cháng zhuó sì-"Long Chop Spoon")) or "long-cut nyout" are emplyed. . . . It is customary in Korea to use the long blocks at the 15th of the first month for the purpose of divination. Early in this month a small book is sold in the markets of Seoul to be used in connection with the blocks. The players throw the sticks three times, noting the number that is counted for the throw at each fall. The series of three numbers is then referred to the book, upon the several pages of which are printed in Chinese characters all the various permutations of the numbers, taken three at a time, Korean text explanatory of their significance. . . . The Chinese Book of Divination consists of 64 diagrams, Kwa (卦-guà-diviniatory trigrams), composed of combinations of unbroken ------- with broken lines --- ---, six being taken at a time, and the resulting diagrams being known as the Sixty-four Kwa (卦). Each of these 64 hexagrams is designated by a name and is accompanied by a short explanatory text. Now the Sixty-four Hexagrams are regarded as an expansion of the Eight Trigrams, called the Pat Kwa (八卦-bāguà-eight trigrams), or "Eight Kwa (卦)," formed by combining the same unbroken and broken lines three at a time. The unbroken lines in the diagrams are called yeung (陰-yīn), "masculine," and the broken lines, yam (陽-yáng), "feminine." It is apparent that if the two sides of the Korean blocks be regarded as representing the unbroken, or masculine, lines and the broken, or feminine, lines, the trigrams will form a record of the throws when three blocks are used, and the hexagrams when six blocks are taken. This I believe to have been their original purpose. I regard the diagrams as records of possible throws with two-faced staves, and the text that accompanies the hexagrams in the Yih King, (易经-yìjīng-The Book of Changes) to be explanatory . . . The Korean game of Nyout may be regarded as the antetype of a large number of games which exist throughout the world. Thus the diagram of the Hindu game known as Pachisi, or Chausar . . . will be seen to be an expansion of the Nyout circuit with its internal cross.

But both the point-marked Nyout board shown above and the standardized trigrams of the I Ching (which have established meanings) could still be used to provide a fortune reading. In the former method, a marked board would be necessary and one's pieces would have to be placed on the board according to one's throws of the sticks; in the latter, all that would be necessary would be to record the way the sticks landed a certain number of times in order to construct the trigrams.  Interpretation would then flow from the trigrams.

Of course, this supposes that the meanings of the points on the Nyout board and the meanings of the trigrams recorded in the I Ching will never be lost.  Unfortunately, we know from history that such knowledge can be and has been lost with respect to other board games and divinatory practices, and once lost, can often never be reconstructed.
Posted by Jan at 1:47 PM