Zheng He Back in the News

There's been a great deal of publicity generated about the discovery of that Chinese vessel that sank off the coast of Kenya in the 1400s.  The Chinese are milking every drop of propaganda they can out of the discovery and the launching of a "team" of archaeologists to study/examine and positively identify the wreck.  I certainly think Zheng He is a worthy subject of such an endeavor, regardless of my personal feelings about the regime currently running things in China.  I thought the 'coded' exchanges between the Chinese representatives and Professor Geoff Wade were extremely interesting! 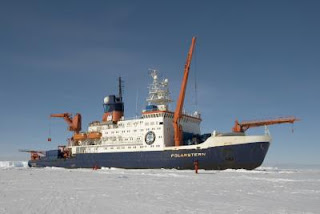 I am trying to get a handle on just exactly how long 400 feet is -- okay -- whoa, I get it.  A football field (not including the end zones) is 100 yards long, 300 feet.  So Zheng He's flag ship would have been like 1.3 football fields!  Now that's pretty big as far as I'm concerned.  Way longer than Bret Favre could throw back in his prime, before he became a traitor, Cursed Be His Name...  I found this photo of a 400 foot long icebreaker ship - it looks pretty massive.  Guess there would be no problem stashing 1,000 men (I'm assuming there were also women and animals onboard) on a ship that size - with several stories above and below the main deck.  Wow! 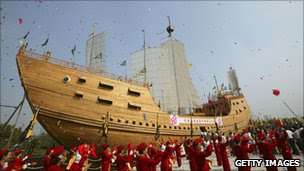 I'm not sure about this image, although it is from the article about Zheng He and the ship off the cost of Kenya.  Is this an actual replica that was built [where and when?], or computer generated?

Here's the article from BBC:

Standing seven feet tall, China's maritime giant Admiral Zheng He led the world's mightiest fleet, with 300 ships and as many as 30,000 troops under his command.

Next month, archaeologists will begin work off the coast of Kenya to identify a wreck believed to have belonged to the man some historians believe inspired the adventures of Sinbad the Sailor.

Chinese archaeologists, who arrived in the African country this week, are hoping that the shipwreck could provide evidence of the first contact between China and east Africa.

Setting sail more than 600 years ago, Zheng's armada made seven epic voyages, reaching south-east Asia, the Middle East, and as far as Africa's east coast.  Some say he even made it to America - several decades before the celebrated European explorer Christopher Columbus - although this has been widely disputed by historians.

Zheng, known as the Three-Jewel Eunuch Admiral, carried gifts from the Chinese emperor aboard his "treasure ship", which groaned with valuable cargo including gold, porcelain and silks.  These were exchanged along the established Arab trade routes for ivory, myrrh and even China's first giraffe, promoting recognition of the new Ming dynasty.

But within years of his death, Zheng appeared to fade from public consciousness, and for centuries his legend was overlooked as China turned its back on the world and entered a long period of isolation.

Now Zheng is enjoying a resurgence - and there appears to be more than historical curiosity behind his revival.

The sunken ship is believed to have been part of Zheng's armada, which reached the coastal town of Malindi in 1418.  The Chinese seem confident they will find the wreck near the Lamu archipelago, where pieces of Ming-era ceramics have already surfaced.

Marine archaeologists are expected to arrive next month.  The Chinese government is investing £2m ($3m) in the three-year joint project, which Kenya says it hopes will throw up important findings about early relations between China and Africa.

Analysts say this ties in well with China's diplomatic overtures to African nations, as it goes about securing natural resources and political influence.

Zheng He - also known as Cheng Ho - is being hailed anew as a national hero; invoked by the Communist Party as a pioneer of China's "open-door" policies that have once again made China a world power.

"The rise of China has induced a lot of fear," says Geoff Wade of the Institute of South-east Asian Studies in Singapore."Zheng is being portrayed as a symbol of China's openness to the world, as an envoy of its peace and friendship - these two words keep cropping up in virtually every reference to Zheng He out of China," says Prof Wade.

In talks with the head of Asean, a grouping of South East Asean nations, earlier this year, Chinese state councillor Dai Bingguo, who is a leading figure in foreign policy, said: "I want to assure you that China is not to be feared."

The voyages of Zheng He, he said, had brought "porcelain, silk and tea rather than bloodshed, plundering or colonialism" - a reference to violent coercive measures used by Western colonisers.

"To this day, Zheng He is still remembered as an envoy of friendship and peace," Mr Dai said.

Zheng He was an admiral in the time of "empire", when there were no boundaries, no frontier limits, says China expert Edward Friedman.

"The expeditions were real events - Zheng's achievements were extraordinary and a marvel of the time," says Prof Friedman of the University of Wisconsin-Madison.

But the detail of Zheng's story is open to interpretation, and the version being promoted by the Chinese government ignores history in order to serve foreign policy, he says.

Statesman Deng Xiaoping, regarded as the chief architect of China's "opening up" in the 1980s, said China would never seek hegemony. And President Hu Jintao has said many times that peaceful development is a strategic choice of the Chinese government.

Prof Geoff Wade, a historian who has translated Ming documents relating to Zheng's voyages, disputes the portrayal of a benign adventurer.

"Because there is virtually no critical analysis of these texts even now - history writing is still in the hands of the state - it's very difficult for Chinese people to conceive of the state as being dangerous, expansionist, or offensive in any way to its neighbours.

"Chinese nationalism is fed on ignorance of its past relations. The way Zheng He is being represented is part of this."

The International Zheng He Society in Singapore disputes this "Western thought", and says the battles that Zheng was embroiled in were either retaliatory or an effort to rid the high seas of pirates.

"These incidents were hardly the nature of true battle but, instead, vividly signify the peaceful diplomacy of Zheng He," said spokesman Chen Jian Chin.

Many layers of myth surround China's ancient mariner. According to Kenyan lore, some of his shipwrecked sailors survived and were allowed to stay and marry local women.  DNA tests have reportedly shown evidence of Chinese ancestry [whose DNA was tested and when?] and a young Kenyan woman, Mwamaka Shirafu, was given a scholarship to study Chinese medicine in China, where she now resides.

"She's as much a symbol of international peace and friendship as any historical legacy," says Prof Wade.

Labels: China in Africa, Zheng He